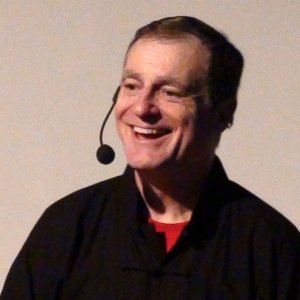 It is with great sorrow that SC-CC announces the passing of a dear, talented storyteller, Max Tell, on December 13th. He brought joy and inspiration to people of all ages, and will be greatly missed. We extend our sincerest sympathies to his friends and family.

His widow, Estelle Bogoch, told Peace Arch News that Stelmach – a familiar face on the Semiahmoo Peninsula arts scene – passed away Dec. 13 in the hospice at Peace Arch Hospital after a short battle with cancer. He was 70.

Bogoch said Stelmach's decline had been surprisingly rapid since his illness was diagnosed in August.

"It was a very aggressive cancer," she said, but noted that Stelmach had remained upbeat and positive to the end, and was able to see proofs of two last books, – a 13-story collection for children and a work of young adult fiction – scheduled to be published in February.

A gentle, fun-loving personality who clicked as a children's entertainer and educator – including stints as MC of the White Rock Sea festival family stage – Max Tell had performed his stories, songs and poems across Canada, in Brazil, Colombia, Singapore, Beijing, Macao, Hong Kong, Japan and the Philippines.

He was also well-known locally from busking performances, supplying his own guitar accompaniment, on Sundays at White Rock Farmers' Market or on the promenade beside White Rock Museum and Archives.

The former ESL teacher and workshop leader – a champion of literacy who was mindful of his own early problems with reading – had trained in theatre arts and studied creative writing at the Banff School of Fine Arts with famed novelist W.O Mitchell.

His play Wild Rose and Half Step was nominated for a Jessie Richardson Award for best Children's Play of the Year in 1991.

He was frequently a finalist in writing competitions, including contests in Britain and Australia, and one of his biggest accolades came when his song Cat In My Hoody won first place in the children's lyric division of the Great American Songwriting Contest in 2012.

In 2014 the Writers International Network gave him the Distinguished Author and Artist Award for for some 35 years of working with children as a writer, performer and educator.

Just this November he received a medal from New Westminster's Royal City Literary Arts Society honouring him for contributions to the society and "inspirational work" in children's writing.

He is survived by Bogoch and two adult children, Anna and Aaron.

Here is a memory from Melanie Ray:
It was a Cric? Crac! night, the Vancouver storytellers monthly story swap, and Max (Robert Stelmach) got up and told a wonderful true story about one of his children, his daughter, who was little at the time.  I had never met her, but he made her so real in the telling, I could almost see her and definitely understood her feelings during the tale.  It had something to do with sharing a sandbox, and it was funny and sweet.  It was so full of his love for her in a totally unsentimental way, it allowed you to walk right in and love her too.