Degree of Truth, A 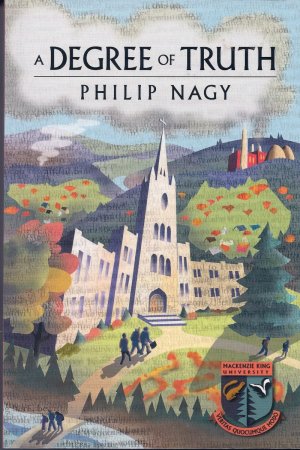 A Degree of Truth By Phil Nagy

A Degree of Truth concerns the compassionate heart of individuals even while
being a satire on university politics. The compassion is, however, both altruistic and
ambitious: altruistic in that the well being of others is a guiding star; ambitious in that
the well being of the self is the dominant star. A variety of characters from students,
academic staff and administrative A personnel display their desire to do good for
others provided their own interests are at best furthered or at least not threatened.
The overarching story is the desire of the principal, Michael Jennings, to bestow
an honorary degree upon a prominent politician. This apparently laudable intent
doubles as Michael’s self -serving desire to curry favour and gain promotion to a more
established university. Meantime, other people strive for prominence. For example,
Orion Hunt is an active student leader promoting the cause of a local Native band
but he later acknowledges his apparent altruism doubles as his need for recognition
as an achiever of social justice.

With the university as one link and the welfare of an alcoholic staff member another, a
variety of tales interplay students and staff. The twists, turns and tensions contribute
to the central tale of self-centred concerns and unfolding consequences. For
some individuals, off-campus characters provide a significant secondary contrast.
For example, Orion Hunt and his parents offer insights into individuation outside
parental expectations. In the end, however, money talks more persuasively than
principle but the machinations make for intriguing developments with an ending
too poignant to reveal here.

While most of the intrigues are resolved satisfactorily, indeed resolved somewhat
optimistically, two remain puzzling. Why did the ambitious, business-bound father of
Orion Hunt send his only son to a non prestigious university as a prelude to an MBA?
What Government would place in Fort McMurray, Alberta a university named after
Pierre Elliot Trudeau? [Editor’s note: Perhaps a government like the one that set
universities with acronyms such as UGH (University of Grey Highlands) and UCOPS
(University of Central Ontario at Parry Sound)!] These puzzles add to the mystique of
the story allowing the reader to speculate on the psychology of the diverse personalities of the story.

The story is told in the style of a dialogue narrative. Although the tale of each individual would merit its own telling in a Canterbury Tales presentation where each story stands uniquely for itself, the stories are interwoven. The interweaving is supported by the dialogue style of narrative used in social suspense novels such as The Ladies Detective Agency by Alexander McColl Smith. In Nagy’s dialogue narrative style, he opts for the colloquial forms of English and the use of short chapters averaging three pages to each plot development.

This book follows Nagy’s first book, Up Deedle Creek, in which he also used his
storytelling skills to chronicle themes of life passage. Nagy has shifted the location
of the life themes from a small township in Eastern Ontario in Up Deedle Creek to a
University amid the Algonquin pines of Northern Ontario in A Degree of Truth. Written
by a professor retired from a much larger university, the author wryly disclaims his
previous work situation as the model for these stories. I recommend reading A Degree
of Truth for its intriguing tales and twists.