René Fumoleau - They Gave Me a Chance 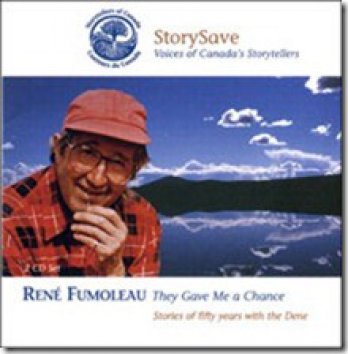 Born in France in 1926, René Fumoleau came to Denendeh (Northwest Territories) as a young priest in 1953. Travel to Rádeli Kóé (Fort Good Hope) involved a long boat journey down Dehcho (the Mackenzie River) into a new world.

Through all of the years, his attachment to the Dene peoples deepened. He celebrated the strength of their ancestral wisdom and committed himself to their desire for change.

René published As Long as This Land Shall Last as a contribution to the struggle over land claims; directed two films, I Was Born Here, and Dene Nation; he also took thousands of photos, now housed in the Prince of Wales Northern Heritage Centre in Yellowknife.

René began creating stories of his experiences in 1988, writing them first in two books of poetry, Here I Sit, and The Secret, and then telling them at events and festivals across the land. His stories can also be heard in a 2014 documentary by Nicolas Paquet Living like the Land (Ceux Comme la Terre).

They Gave Me a Chance: Stories of Fifty Years with the Dene

With compelling sincerity, a master storyteller and historian chronicles lessons learned from living among the peoples of the Dene Nation. Speaking always from the heart, he tells of traditional ways and recent changes, of a lifetime fully lived.

“René Fumoleau offers his stories with gentle humour and a love for the north and its peoples. His words are a gift.” Charles Arnold, Director, Prince of Wales Northern Heritage Centre, Yellowknife

Purchase the CD at SC-CC's online shop. You can also purchase a digital download of the CD at Bandcamp.

Disc 1: A Chance to Learn

René tells of arriving in a world where winter travel was by dog sled, summer travel by boat or canoe; where hunting and fishing were the means of survival; where distances were measured in pipes smoked; where wisdom was innate. He conjures moments of revelation—about caring and forgiveness, knowledge and faith—offered to him by those he lived with day by day.

Disc 2: A Chance to Grow

The stories move towards more recent years and struggles for Native rights. René created vignettes to explore political issues and expose the follies of contemporary life. The last pieces are interspersed with drumming and singing recorded in Radeli Loe (Fort Good Hope) in 1957. The fact that this music was made to comfort those transported to distant communities for health reasons adds to its poignancy.

Versions of these stories can be found in Rene’s books Here I Sit and The Secret and are included with permission of the publisher, Novalis. René is happy to have others telling his stories but asks that he be informed (please contact the StorySave Project Manager at storysave@storytellers-conteurs.ca) and that respect be shown for those mentioned. Both he and StorySave should be credited for use.

Written permission is required for recording, videotaping or other means of reproduction.