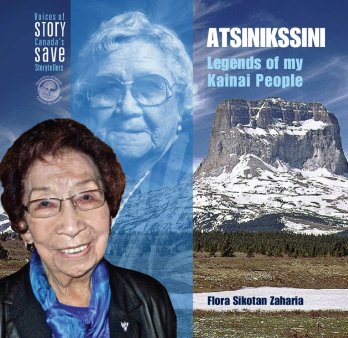 Flora Zaharia is a master storyteller who hails from the Kainaisskashkoyi Reserve in Alberta. In this two disc recording, she tells the traditional legends of the Kainai people from her mother and grandmothers. To buy Flora's 2 CD set, visit her SC-CC Shop page.  You can also purchase a download of the album through Bandcamp.

I am Flora Sikotan Zaharia, from the Kainaisskashkoyi Reserve in Alberta, part of the Blackfoot Nation. The Nation is composed of three southern Alberta tribes - Kainai (Blood), Siksika (Blackfeet), Piikani (Peigan); the Aamsskaapipiikani (South Peigan) are in Montana. Each was named by the federal government - Blood, Blackfeet and Peigan - but now go by their own names. All four speak Blackfoot and share similarities, but each has its own distinct social and political identity.

I have learned the traditional legends of the Kainai people from my mother and grandmothers. At 87 years old, I am only now beginning to share legends with people outside of my tradition. It is important to me that other people have a better understanding of our culture and history through these stories. The main figure in the stories is Napi, the trickster who teaches us lessons. I also tell one long story of “The Lost Children,” a very old story that is found throughout the Blackfoot nation. Along with the traditional legends,

I tell about the history and culture of my reserve and my family. I include our residential school experiences in three generations of my family.

StorySave wishes to acknowledge the support of the University of Manitoba's Centre for Creative Writing and Oral Culture in the production of the album.