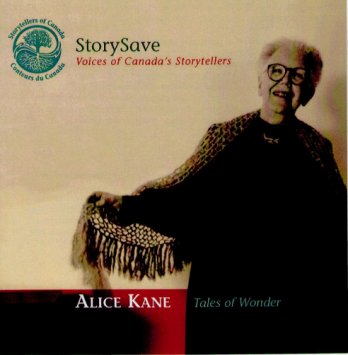 Alice Kane was a Toronto storyteller for more than sixty years. Born in Ireland in 1908, she moved with her parents to Canada in 1921. She was educated in New Brunswick and at McGill University in Montreal before beginning a career with the Toronto Public Library, where she had a major interest in fairy tales. After her retirement in 1973, she taught Children’s Literature at the University of New Brunswick, then began a second career as a professional storyteller in association with the Storytellers School of Toronto, an organization she co-founded. Alice was a featured performer at many storytelling events, including the American Storytelling Festival at Jonesborough, Tennessee, and was especially loved for her telling of Irish hero and wonder tales. Her rich oral heritage is remembered in Songs of an Ulster Childhood, edited by Edith Fowke (1983). The Dreamer Awakes, a collection of her best-loved stories, was published by Broadview Press in 1995.

Alice had a musical voice that carried her audiences away. She held the firm belief that stories can mend broken hearts and broken worlds. In her essay, A Sword of Power, A Mother’s Blessing, Alice answers her own question: what would it be like, the shining talisman that can bring the world to rights?

Alice passed away in 2003, and since then Storytelling Toronto has annually presented The Alice Kane Award to those working to advance the art of storytelling.

You can purchase the CD by visiting Storytellers of Canada's online shop. You can also purchase a download of the album at Bandcamp.com