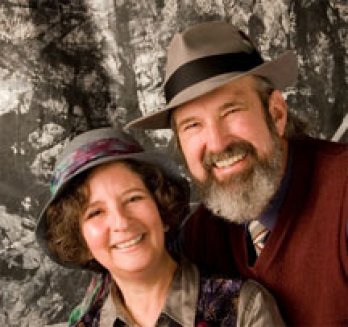 Leslie Robbins-Conway is a former active member of the Toronto storytelling community, and founder of Jewish Storytelling Arts. Her repertoire extends widely in the folk and classical traditions, for both children and adults. She is a notable innovator in that wide field shared by storytelling and theatre, in such productions as The Interrupted Life of Etty Hillesum; Sammy Taft, World Famous Hatter; and The Golum of Toronto. She has performed for the past twenty years at festivals, concerts and other storytelling events across Canada, in schools and other community settings, and on radio and television. Leslie is a founding member of Storytellers of Canada - Conteurs du Canada.

Paul Conway is a writer, singer and classical storyteller with a particular interest in Canadian history and myth which he renders into stories, ballads, and operatic arias. He combines his own material with diverse borrowings from folk, literary and musical traditions to create unusual entertainments such as The Athabasca Fur-Trading Adventure of Wolfgang Amadeus Mozart, The Mermaid of Yellowknife Bay,Wake Up Macushla!, and others. He has produced, directed and performed in musical plays and operas, and was for several years a member of the Edmonton Opera Chorus.