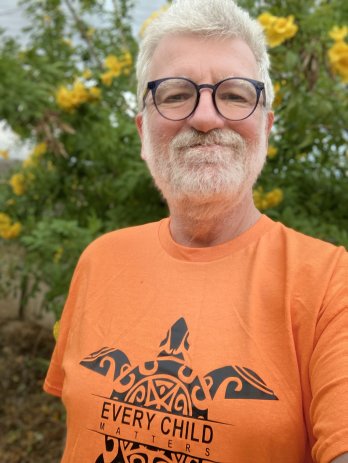 Michael served on the SC-CC Board from 2018-19. He is the current Coordinator of the SC-CC House Concert Network. Particular interests include therapeutic storytelling and storytelling in business.

I was born and raised in Hamilton, Ontario. Although my dream was to become a writer, I let a maths teacher shame me out of following my dream. I spent the next 13 years trying one thing and another, wandering here and there. I worked as a miner, a steel worker, a window washer, a dish washer, a waiter, and lots of other things. Along the way I trained as a Child Care Worker counselling adolescents in care and their famiies. I took a bus load of teens from London Ontario to Vancouver and only lost one kid (who was eventually found in Seattle all the better for his adventure), sent two back for robbing a gas station, blew out one bus engine in Wawa and had to camp in the bus for a week until a replacement engine could be found, and eventually blew out the other engine on the way back outside Saskatoon and brought all the kids back on the train.

I've been a professional storyteller since 2000 but my roots go back to childhood. I grew up in an extended family where grandparents, great-uncles and aunts all told stories, drank, smoked, and laughed a lot. I didn't understand a lot of their stories but they seemed like fun.

In 1974 I hitchhiked around the southern States, met a group of itinerant Vietnam vets and had my first lesson in listening to stories and understanding that telling and witnessing them was crucial to healing.

Lesson 2 came when I made a bad judgement call and got into a car with two escaped convicts. The car was stolen. The guys had guns and drank a lot. I was their driver and they wanted me to drive them from Florida to Texas. What they were going to do with me then, I'll leave to your imagination. It was my ability to weave my story into theirs that entertained them and kept me alive until I could escape somewhere in Mississippi.

Lesson 3 occurred in New Orleans where I learned to drink cheap red wine and was taught how to step dance in the street with black men for quarters (which bought us more cheap red wine). Their stories taught me compassion and invited me to view the world through another's eyes (and feet).

Eventually, I came home and began working with the aforementioned teenagers -- young men and women -- who taught me my most valuable lessons about the importance of sharing our stories and helping each other understand their significance to our well-being.

In 1983 I returned to University to study literature. I was 30 years old, married, and the father of two children. I worked in a bakery at night and dragged myself to classes in the morning. I was known at the "Renaissance Man" because of my wide and varied interests. Rather than specialising in one particular area, I sought to learn for the sake of learning and not for a particular job. I loved my time at University. I was encouraged to do a Masters and when I completed that, encouraged to do a PhD. A SSHRCC scholarship allowed me to move to Scotland and attend the University of Edinburgh, where I was given the freedom to explore my passion for autobiographical narrative. And, because I said "Yes!" I was given the opportunity to teach at the same time, firstly in the Centre of Canadian Studies and secondly in the Department of English. I was truly immersed in the world of story.

But by 1995, I'd become frustrated with the corporate takeover of universities. Teaching, it seemed to me, had become a low priority compared to raising money, research, and publication. I accepted a position as Principal Teacher of English at Edinburgh's Rudolf Steiner School and was back working with adolescents. During the next 10 years, I built up the English Dept and improved exam results and further deepened my love of story and storytelling. During the late 90s I became acquainted with the Scottish Storytelling Centre. For the next seven years I "apprenticed" as a storyteller, working primarily with adolescents in residential care and school settings.

However, it wasn't long before I had a breakdown--addicted to my work--and began to hear that inner voice calling me away from teaching. After my attempts to silence it failed, I finally made the decision and in 2005 I left full-time teaching to become -- a storyteller and story coach. I had no real idea how I was going to manage that and support a family with now three growing teenagers. I trained as a peace education facilitator and worked with primary school aged kids, inviting them and their teachers to learn techniques of reducing stress and resolving conflict and generally improving their relationships in school.

Around the same time I was invited to join the General Teaching Council of Scotland's Chartered Teacher Accreditation programme as an Adviser and Assessor, helping senior classroom teachers tell and critically reflect on the stories of their professional development. In 2009 I was invited to join an international group of storytellers on a journey to the Middle East to work with groups of Arabs and Jews, using storytelling as a means of encouraging dialogue and mutual understanding. Thanks to the support of the Scottish Arts Council, I experienced something truly transformational.

In 2010, the Scottish Arts Council funded me again, this time to take up a post as Storyteller-in-Residence at a community art gallery in Charlottetown, Prince Edward Island. That posting also gave me the opportunity to speak at the national conference of the Storytellers of Canada-Conteurs du Canada in St John's, Newfoundland where I spoke on my experience in Israel and Palestine.

Upon my return to Scotland I established my own Story Coaching business, working with individuals, groups, and organisations, helping them uncover, share, and understand the stories they need to tell to improve the world around them.

I am passionate about story and storytelling. In the Spring and Summer of 2016, I travelled to Canada to attend the Toronto Storytelling Festival just to meet other storytellers and introduce myself and my work. I organised a mini-tour of house concerts or "story ceilidhs" as I prefer to call them, emphasizing the old meaning of "ceilidh" as a gathering, where we all share stories. I am not necessarily the main attraction (although I'm happy to provide the structure) and encourage my audience to share their stories and to get to know one another better.

My intention is to spend more time working in Canada (my oldest son and grandsons live in Ontario now) and some of my time in Scotland (my second son and grandson live in Edinburgh) and Europe (my youngest son lives in Berlin). I facilitate storytelling workshops, 1-1 Story Coaching, narrative approaches to leadership and community building, and finally, creative writing and performance (memoir, transformational monologues, public speaking).

I'm also the host of "The Teller and the Tale" (www.thetellerandthetale.com) a weekly half-hour radio programme featuring storytellers and their stories. If you'd like to be a guest, please contact me at iamthestoryteller@gmail.com.

In short, storytelling is my spiritual practice. I hope that one day I'll have the chance to get to know you and hear your story.

Update: August 2019 My teenage dream of becoming a writer has been realize after more than 50 years! My short story "All Things Shall Pass" was just awarded 2nd place in the Hamilton Mountain Writers Guild Short Story Competition and will be published in their upcoming anthology of short stories.