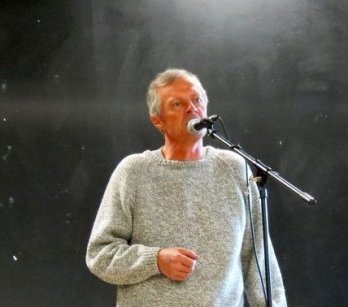 Dave Paddon is a retired airline pilot originally from Northwest River, Labrador. He grew up listening to the songs and stories of the trappers and attending many a late night session around many a kitchen table. In 1986 he married a Gander girl and subsequently became immersed in Island culture. As a result he accumulated a store of material which suddenly bubbled to the surface when he and Kim returned to Newfoundland and Labrador in 2005 after 20 years upalong. He wrote his first recitation in 2007 and has now written 40. Five of these have been published in handmade chapbooks and his work is available on two CDs or through electronic download.
Two of Dave's recitations have been adapted as illustrated children's books. Ralph: Flying Hound and Kimmy and Mike are suitable for ages 3 to 10.

Half the lies you tell are not true! is a collection of 13 recitations and features a glossary of Newfoundland terms for the upalong crowd!

Dave lives in St.John's and is a regular at festivals and fundraisers throughout the province. He has also performed in the U.S., Scotland and Ireland.