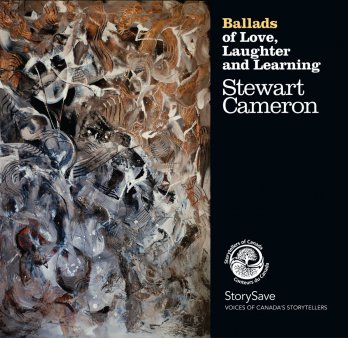 Stewart Cameron was a beloved balladeer and storyteller with an undeniable passion for ancient stories, whether told or sung.  He was able to bring them alive for all who were lucky enough to see and hear him perform.

He performed regularly at folk and storytelling festivals in Ontario in the 1970s and 1980s. Sadly, he died young without ever having made a professional recording. StorySave is pleased to present two CDs of Stewart’s work: Ballads of Love, Laughter and Learning, and its companion, Tales of Love, Laughter and Learning (found here). The pair were put together from refurbished archive material spanning a decade to ensure that the magic of his unforgettable talent can be heard and enjoyed once more.

About Stewart and this Recording

Stewart Cameron was born in Scotland in 1947. His parents, Duncan, a native of Scotland, and Muriel, originally from Halifax, Nova Scotia, moved to Ajax, Ontario when Stewart was a year old. Growing up he learned to paint and to write songs in a style reminiscent of Bob Dylan. He became involved in performing traditional ballads and stories as an adult living in Toronto. He was a member of The Friends of Fiddler’s Green, a folk band, and regularly performed at 1001 Friday Nights of Storytelling.

In the mid-1980’s, Stew moved to Sudbury, Ontario where he produced several cable TV shows on storytelling and ballads. He died in 1989 of cancer, never having officially recorded his repertoire. His tradition of ballad singing and storytelling has been carried on by his daughter, Moira, and his son, Duncan. This recording is their tribute to his legacy.

These ballads have been digitally remastered from several archive sources. Most of the material came from cable TV shows Stew produced in Sudbury 1983 -1984. Other material was recorded on a variety of practice tapes and demos. The sound quality is all mono and may include background noise. However, the quality and energy of the performances is unquestionably impressive.

Stew uses a Larrivée guitar, Appalachian dulcimer, and English concertina on this recording. The majority of the ballads are sung a cappella. If you wish to see videos of some of this material, type in “Stewart Cameron” on YouTube to visit his ‘channel’.

To purchase the Ballads of Love, Laughter and Learning CD, click here. The album is also available to purchase via download from Bandcamp. Click here to find it on Bandcamp.