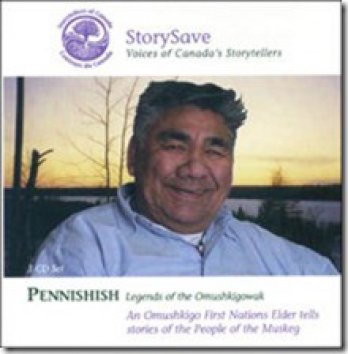 Omushkigo Elder, Pennishish (Louis Bird), is well-known for his appearances at storytelling festivals across Canada and beyond. He was born in a wilderness camp in Ontario’s Far North and grew up in a world of traditional hunting and fishing, listening to the stories of his Elders.

Concerned for the heritage owed to future generations, Pennishish began to record the voices of those who had lived the old ways. The work has continued to grow and now forms the basis of the Omushkigo Oral History Project, aimed at ensuring that Omushkigo history is published in the Omushkigo language in written form.

Pennishish describes the stories he tells as “textbooks,” encompassing a complete system of ethics, a fullness of spiritual belief: everything required for successful living in a harsh land.

In this 3-CD set, Pennishish offers a progressively profound experience of his people’s traditional life in the James Bay Lowlands – the lands of the muskeg where the ice goes out of the Hudson’s Bay in August and the tundra spreads for endless miles. Recording for the CDs was carried out in an informal home setting. This has had some effect on sound quality. Removed from the time constraints of a studio, however, Pennishish was free to weave the stories into a continuous flow, interpreting their meaning in the manner of his Elders.

To purchase the CD visit Pennishish's page in the Storytellers of Canada's online shop. You can also buy the album as a digital download from Bandcamp.com

Pennishish believes that, once a story is told, listeners have a right to retell it in their own ways. He asks that the stories be recognized as oral history: that what is recounted truly did happen once. Only Omushkigo elders may provide interpretation.

Pennishish should be acknowledged as the source for any tellings resulting from these CDs. Written permission is required for recording, videotaping or other means of reproduction.