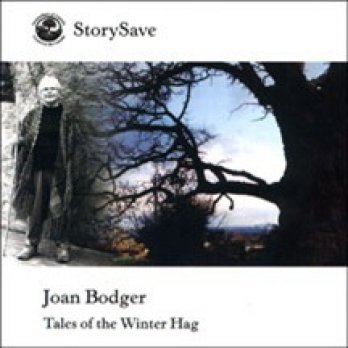 Joan Bodger was born in California in 1923. Because her father was an officer in the U.S. Coast Guard and her mother came from England and returned there for protracted visits, the family moved around a great deal. It was books, stories and talk that became the constants in Joan’s life. She attended Pomona College in Claremont, California; she served as a cipher clerk in the army during World War II. In 1948, she took a course on storytelling at Columbia University. Her innate interests validated, she decided that a storyteller was what she really wanted to be.

By that time, she was married. During the years of her marriage, she had two children. Her daughter died from a brain tumour at the age of seven; her husband was diagnosed as schizophrenic. The marriage collapsed. Her son was confirmed as being schizophrenic also. As a teenager, he took to disappearing; he was eventually gone for years.Throughout all of this, Joan maintained her conviction that stories and storytelling were important. She was also active, both politically and socially: participating in protest marches and rallies on social issues; opening a library for neighbourhood children.

In 1963, Joan began telling stories to black children on the streets of Nyack, New York, in preparation for the founding of the first Head Start pre-school program in the United States. In 1965, she was hired to begin a similar program in an orphanage for severely disadvantaged children. Storytelling was crucial to both programs. Joan used revolutionary approaches; the children flourished under her care. In 1968, she was invited to become Director of Children’s Services for the State Library of Missouri. She was fired from this job, as “a communist pornographer,” for writing a public letter in support of a censored student newspaper on State Library stationery. By then her knowledge of children’s literature was extensive and she was hired as an editor by Random House.

Joan re-married and moved to Toronto. At Christmas in 1974, she began telling stories at The Underground Railroad Soul Food Restaurant. She continued telling stories at the Underground Railroad every third Sunday morning of the month for the next nine years. In 1978, Dan Yashinsky came to meet her. He was in the process of becoming a storyteller and of undertaking to make storytelling a vital part of Canadian life. He began a regular weekly storytelling evening at Gaffers Café. Together Dan and Joan planned the first Toronto Festival of Storytelling.

Joan liked to initiate rather than to toil on endlessly, but she cared passionately about storytelling. There are those who remember the urgency with which she insisted that the first storytelling festival focus on telling to adults. And… it was Joan who joined with Lorne Brown in the conception of Appleseed Quarterly, The Canadian Journal Of Storytelling; Joan who designed the pilot project, which became the Parent-Child Mother Goose Program, whereby storytelling might be brought to families at risk. In Toronto, Joan took training as a Gestalt therapist and used storytelling in her therapeutic work. The tragedies of her life were not over. In 1985, her second husband died of cancer. Her son was found but his mental illness, of course, remained with him.

Joan was also a writer. She published books and articles (see Joan’s Books In Print link). As time went by, she became more and more concerned with telling the stories of her own life. They began to enter into her storytelling repertoire; they appeared as magazine articles. In 2000, The Crack In The Teacup. The Life Of An Old Woman Steeped In Stories — her autobiography on which she had struggled long and hard — was published (see The Crack In The Teacup link).

Soon after the book’s publication, Joan was diagnosed as having colon cancer. She chose not to have chemotherapy. In November 2001, she appeared at 1001 Friday Nights for the last time. She told Tristan And Iseult, the story that seemed to speak to her most strongly of all the ancient tales. A week later, she left for Tofino – a small town at the far end of Vancouver Island – to die by the sea. She thought perhaps to walk out into it but, in the final event, knew that this was not something that could be done. She died in a hospital. She watched the sea from her window. Always a one to do things in style, as an American by birth, she managed to take her leave on the Fourth of July.

Joan was StorySave's featured teller for 2003. From the beginning, we knew that Joan Bodger was a StorySave “must have.” She became sick with cancer, however, before any recording could be undertaken. Fortunately, we discovered a taped cassette of a program which she had performed at the National Library of Canada in 1989. The program was entitled Tales of the Winter Hag.  You can enjoy three stories from that program on the at the bottom of this page. The entire program can be heard by purchasing the CD.

To purchase the CD visit SC-CC's online shop. To purchase a download of the album, visit the Bandcamp page for this album.

Figures In A Landscape is part of Joan’s performance of Tales Of The Winter Hag recorded live at the National Library of Canada on November 30, 1989 and made available on CD as part of StorySave’s work.

The chapter from Joan’s book, The Crack In The Teacup. The Life Of An Old Woman Steeped in Stories (published by McClelland & Stewart, 2000) is copyrighted by Joan Bodger and reprinted with permission.

Thanks is expressed to the Osborne Collection of Early Children’s Books. The Osborne Collection houses Joan’s papers as archival material for further research. The photo of Joan on the log was taken by Fiona Christie on December 30, 1998 at Wimble Toot, near Glastonbury, England.

The Crack in the Tea Cup

The Glacier Knocks in the Cupboard
My earliest memory is of a shaft of light filled with shining motes, and the sight and sound of a six–inch silver dollar (fake) rolling on its rim across our nursery floor, and of my older sister holding her hands over her ears. She is screaming a high, piercing scream. Mother has come to the doorway.

The year was 1926. Mother was early–on pregnant with my sister Joyce, her third child. I was not quite three. Anne was two years older than I. Pale and feverish, with deep circles under her eyes, she had been in hospital much of her life. With no benefit from antibiotics, she had undergone three mastoid operations. She often suffered excruciating pains in her head and behind her ears. In all innocence I had rummaged in the toy box, had found the souvenir of San Francisco’s United States Mint, and had sent the silver disc on its reverberating course along the path of sunlight. What was music of the spheres for me was agony for Anne.
If I were going to caption the picture I would have a balloon coming out of my mother’s mouth: Now look at what you’ve done! I looked. I saw. I woke from my dream–time. From that moment on I continue to remember. The moment just before is the moment I seek to recapture.

Susan K. Langer, in her book Feeling and Form, discusses that time–space in life when a child is about to cross the threshold into language. Langer contends that a pre–verbal child lives in a world where, for example, the feelings of “heaviness” and “permanence” may be articulated by the presence of the bureau across from his crib. Light coming through a window may speak volumes not only to him but for him.

The sculptures of Claes Oldenburg are, to me, voices from that same anteroom. Oldenburg says that his inspiration for enormous soft typewriters and gargantuan kitchen objects came from a scrapbook given to him by an aunt when he was very young and ill with fever. Immersed in those pages, he took it for granted that an orange could be as big as a house. When I behold his works I feel the tug of intimations.

Maurice Sendak, in his picture book In the Night Kitchen, shows a dream–like urban skyline composed of architectural salt–shakers, egg–beaters, and pop–art packaging, all in the style of the late 1920s, or early 1930s. The back of my neck prickles. The same sensation occurs when I come across a book I knew then. Or, at the flea market, when I happen upon a relic washed up from my personal Lyonesse, a landscape lost forty fathoms deep beneath the waves.

Langer stresses how important it is that the child have the chance to go back and back to explore the same objects in the same environment in order to check out the reality of her personal landscape. Myth emerges from landscape. Parents know, or are soon taught, how important it is to tell the same story in the same way, to look at the same pictures we looked at yesterday, and to provide the same blanket, the same toy. Because of my father’s job in the United States Coast Guard, our family moved frequently. When my parents were young we often lived in rented apartments with rented furniture, but wherever we went the books and toys traveled with us. The toy box in which I rummaged was our sacred Ark of the Covenant, carried at the forefront of our tribal procession.