A History of the Storytellers of Canada – Conteurs du Canada Banner 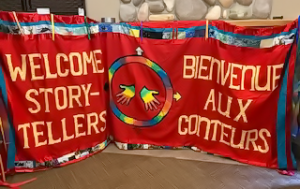 A History of the Storytellers of Canada – Conteurs du Canada Banner

In the year 2001, I created what I thought was a one-off banner for the SC-CC conference taking place that summer at Bishop’s University in Lennoxville, Quebec. I was only thinking “theatre” and “welcome”, so chose luxurious satins and flamboyant ribbons that would blow in the wind (it was displayed outside), to create that effect. Little did I know, that apart from a few conferences when the banner was not on display (it took a while for the idea to catch on and at one point it simply disappeared, waiting to be found again), it would become a cherished item and would travel many times across Canada.

In its travels, certain individuals added their own embellishments. Linda Winham of Halifax sewed on extra ties, and Cindy Campbell-Stone, (also of Halifax?) purchased the piece of luggage in which it now travels. At one point, when it was back in this area, I took some time to add sewn ribbon around the letters in order to define them more, but I have to say that it often troubled me that something I had sewn together very hastily in the tiny confines of my laundry room, had come to represent our organization.

Then during the 2019 SC-CC conference in Fredericton, New Brunswick, in a small-focus group which included amongst others, Dinny Biggs; Jennifer Cayley; Marie-Louise Perron and myself, we discussed the banner and how it could be refined to include a more specific welcome for Indigenous tellers. It was Marie-Louise who gently guided us to the idea that we should start all over again. I was personally thrilled to be given the mandate to create a more inclusive banner. I was always a little ashamed of my first effort.

Thus began moments of consultation (e-mails exchanged with Louise Profeit-LeBlanc, Marie-Louise and Dinny), and a particularly helpful weekend at Jennifer Cayley’s home at Taylor Lake in Ontario, where Ron Evans was present to share his life-learned insights in a workshop designed for a small group of tellers. I had created a hasty water-colour sketch of what I intended to convey with the banner, and by sharing that image with Marie-Louise, Sue Charters and Dinny (who were present for the workshop), and by listening to their comments, I felt that I was that much closer to achieving a memorable banner.

Then came the fun part…many, many trips to the fabric store, over a period of months, always on the look-out for fabrics to represent the diversity of Canada’s geography and wildlife. I was not the only one searching. At times I would ask for help from my sister Mary who lives in Perth, Ontario. I would send her e-mails saying, “Mary, I need a moose! a bear! a cow! deer!...” and her short response would be, “I’m on it!”. She certainly was…what she found was invaluable to the creation of the banner.

I had certain intentions, the most crucial being, how to show a welcome specific to Indigenous tellers? It was Louise who gave me that precious image of out-stretched hands and I decided to display them within a circle, with compass points included. It was Marie-Louise who suggested that I could use the colours of the medicine wheel on the compass points. To make the central panel even more inclusive, I abandoned my idea of having just a black circle and black hands, and painted white fabric with rainbow colours, which makes for a very striking image. Those who have the chance to see the banner in person will notice that rainbow colours appear throughout. As do the three primary colours – red, blue and yellow, from which all other colours are derived.

I was still restricted to my tiny laundry room (I internally called this project “The laundry room / kitchen table creation,” for all measuring had to be done on my harvest-length kitchen table), and so decided to work on three separate panels and join them together at the end. In spite of my intentions to create a lighter banner I do not believe that I succeeded, and in spite of wanting the lettering to look pristine, they were mashed and mashed again as I had to drag lengths of fabric through the narrow opening of the sewing machine.

In my efforts to make the banner inclusive, I decided upon narrow borders to represent, as I mentioned earlier, the diverse geography and wildlife of Canada. My original idea was to have the three coastal areas represented by ocean fabric, but again Marie-Louise pointed out that the northern regions should be represented by more than just a border of ocean. This led to a fun time of finding fabric to represent the northern lights, ice etc. The ocean for the north became a very narrow strip as I focused on representing the land.

The lower border band of images can be read as a trip from the west to the east of Canada, with whales and lighthouses being visual bookends. I turned to Danica Lorer for suggestions on how to represent the Prairie Provinces, and although she made excellent suggestions, the fabric images simply could not be found. I ended up placing a Quebec farm in the middle of the prairies.

I see this banner as something that will continue to evolve. I know that when I stepped outside one snowy morning and heard the cheerful and cheer-up song of a chickadee, I wished that I had been able to find an image of one to include. I would also have loved to have found an image of the wind blowing across the prairies.

Once completed, I took the banner back to the store where I had purchased so much of the fabric, to display it for all of those sales people who had cut and commented on the fabric that I was choosing (“Madame! You always buy cotton and linen…what are you doing?!!!). I mostly needed small amounts of fabric, but the minimum purchase was twenty centimeters, which meant that the bolts of fabric would be piled sky-high and much cutting was required, without much monetary compensation for the store. I thank those employees for their patience and interest in the project.

Finally, I hope that organizers of the SC-CC conferences in the future, will record the date, location and names of the organizers on the back of the banner, as an archival record of its travels. Meanwhile the old banner is stored somewhat grumpily in my wooden chest at home.

P.S. Since the original publication of this article, Louise Profeit-LeBlanc arranged the purchase of a carrying case. I leave it to Louise to provide the details of that story…I am sure that it is fascinating.